The Creek to Canal (C2C) Creative District is designed to build on the city’s thriving arts and culture scene by supporting creative projects in Downtown Trenton.

The district sits between the D&R Canal and Assunpink Creek. Route 1 follows along the eastern side, while the western border at Willow Street connects the District to historic sites and the state capitol complex. 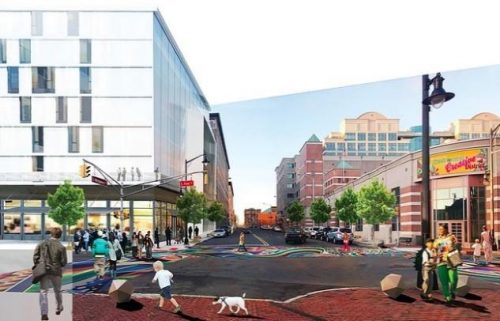 C2C is the result of six months of planning – known as Trenton Arts in Focus – where Trenton residents and stakeholders identified how the Downtown can benefit from the infusion of fresh art galleries, studios, and other creative businesses during redevelopment. The Creative District leverages the progress of local art organizations and artists as well as community support, political will, and the resources that support positive change in Trenton.

Want to learn more about C2C?

The 165-acre Creek to Canal Creative District has opportunities for additional rehabs, 107 distressed or vacant buildings, 28 vacant storefronts, 4 acres of vacant land, and 26 acres of underutilized surface parking. These properties could be used in creative ways, such as pop-up businesses in vacant storefronts and art galleries in underutilized parking lots. The area that makes up C2C has also suffered from past economic disinvestment:

Negative perceptions of Trenton are a challenge when attracting residents, artists, creative entrepreneurs, businesses, and visitors to the Creative District. Trenton’s arts scene is also largely underground and suffers from a lack of adequate promoting, where many are largely unaware of events. Isles works to continuously celebrate and advocate for the arts in Trenton through our work in the C2C Action Committee and public arts policy.

The C2C Creative District has many existing assets and resources such as its prime location in Downtown, excellent highway and transit access, architecture, and engaged stakeholders. The growth of this area is vital in supporting local businesses and services, generate more activity, which in turn will result in safer streets and increased vibrancy. Investment in C2C: