Isles helps transform outdoor spaces into areas that promote healthier communities and offer residents better amenities.  One way we’ve done this is by installing seating areas known as “parklets” across the city to engage residents with nearby businesses.  A parklet is a mini “park” that transforms a parking space into vibrant, useable public space. They consist of raised platforms with seating with the addition of planters that feature flowers, herbs, and native plants. 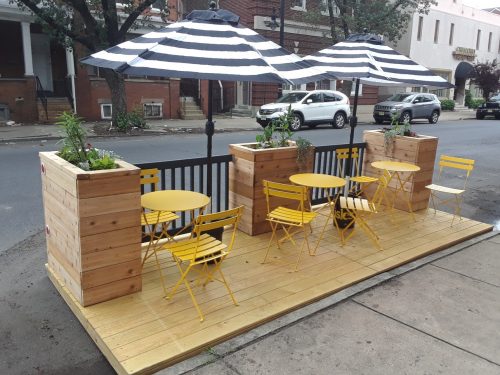 Isles installed the first parklet in Trenton in September of 2017 at a café across the street from the NJ Statehouse. The parklet was built to coincide with international Parking Day, where parking spots are temporarily taken over and converted for art, play, or activism. Originally intended to be in place for only one week, the parklet was met with such enthusiasm that the City of Trenton allowed the parklet to stay up for the rest of the season. Using best practices from successful parklet programs around the nation, Isles then worked with the City in the following years to develop and implement a formal parklet program and expand parklets to other neighborhoods.

This year, in partnership with the City of Trenton and the Trenton Downtown Association, Isles designed and constructed several outdoor parklets for qualifying Trenton businesses to assist with economic recovery during the pandemic by increasing options for outdoor dining. “The pandemic has provided a unique opportunity to creatively re-think public space and promote more safe, outdoor social interaction,” said Jim Simon, Deputy Director of Community Planning at Isles, who oversees parklet construction and installation. “Parklets help shift the focus away from cars and parking toward a more human-centered experience.”

A recent parklet build was for the Trenton Ice Cream Parlor located at 969 South Broad Street.

“Several days after our Grand Opening in March 2020, we had to close our business due to the NJ Statewide shutdown.  So the option of having outdoor seating once we decided to reopen had great appeal to us,” explained Trenton Ice Cream Parlor owners Eric McRoy and Konjit Hailemichael.

The shop is a passion project originated by the owners’ daughter Hannah—a nonverbal autistic teen who had a dream of building an ice cream parlor.  Hannah used her creativity to design a 3D diorama of the store in hopes of one day bringing her vision to life.  Her family had the idea to start a business using the ground floor of a building they owned on South Broad Street.  The shop had its official opening on March 12, 2020 but had to shut down shortly after due to the pandemic.

Earlier this year, Isles contacted the shop for a visit and to give an overview of the parklet grant program and its requirements.  After designing a layout, Isles’ construction team rapidly got to work pre-assembling and fabricating decks and planters for the parklets, making the installation process quicker once on site.  “All of the current parklets elements were designed to be modular, so they are interchangeable and can be adapted to different sites for future use,” said Jim Simon. “We used the modular concept to create a ‘mega-parklet’ on Warren Street that features an ADA accessible section at street level between two full parklet platforms with an additional picnic table and upcycled dinette booths. We wanted to show that these were not just for single businesses, but common spaces that anyone can enjoy.”

“The parklets have had a tremendous impact on the visibility of our business from the street view and the inherent safety and urban flair for our neighborhood,” commented McRoy and Hailemichael.

What’s especially important for the family is how the community has taken great initiative to keep the outside area clean and inviting for future guests.

“The increased visibility and increased number of outdoor diners have also contributed to the overall cleanliness of our neighborhood.  Many neighbors and individuals passing throughout the community now make a concentrated effort to sweep, clean, and use nearby trash receptacles,” commented the owners.

Isles is proud to partner with Trenton Ice Cream Parlor to show how revitalizing public spaces can lead to stronger communities.

“When you decide to partner with Isles, you are working with a partner that has had a solid track record of community involvement,” explained the Parlor.  “For over 40 years, they have been active in the Trenton community and understand those communities.  They know what actions need to be implemented to have the most dynamic impact.”